Connect With Us:
The voice of Manilla since 1899
Saturday, 10, December

Several members of Manilla Vintage Machinery Group threw Covid blues to the wind and cranked up their old vehicles for a 57km Tractor Trek around the Somerton backroads on Monday of the October long weekend.

The decision to hold the trek – a highlight being lunch at the Somerton Hotel, was to not only lift the spirits of members who have been disadvantaged by Covid, but also support their local watering hole according to group member DenyceRoach of Bective.

“The hotel has just been restored and manager Annette Mackley, who I believe is a former Manilla girl, is doing a fantastic job over there. She gave us an absolutely fantastic lunch too,” Denyce said.

After taking in one of Denyse’s well known morning teas at her and hubby Ken Roach’s property ‘Jaffa’, drivers sat high in the seats of their eight vintage tractors and one vintage truck for stage one of the trek – a 22-kilometre long ramble through dusty backroads in the direction of Somerton Pub. There they took in lunch, had a good natter and caught up with local news from group mates before climbing back into their vehicles and meandering their way back over 37km to ‘Jaffa’ for a wind-down afternoon tea.

“We avoid highways for obvious reasons. The only time we hit the highway last weekend was to cross it to the hotel.”

Denyse said it was lovely to catch up with friends on the trek.

“We’re all mates, but we haven’t been able to even have our regular meetings because of Covid. Though we were lucky in being able to hold our main event, the annual Machinery Rally at Manilla Showground back on the June long weekend. From that, we’re able to give small donations around the community,” Denyce said.

Manilla Vintage Machinery Group was established around 30 years ago, and, along with a very successful machinery rally in June each year, participates in regular treks around the region. This weekend several members will spit polish their vintage tractors/trucks and head to Spring Ridge for the Quirindi member-hosted Tractor Trek.

“Many groups hold their own trek – some do up to 100km, and we always try to support them as much as we can, though Covid this year has proved a hassle for many. Most of our group’s tractors – along with Warren Skewes’ truck, are fully restored vehicles – all except for ours that is. It’s still in working clothes. And there were no stops for repairs along the way, the trip was very uneventful in that respect,” Denycejoked.

“It was a wonderful day – a lot of credit for that going to Annette. And she held a very big Sunday Market Day the previous day. I don’t think I’ve ever seen so many cars in Somerton,” she said.

Meanwhile patrons and the general public are advised that Somerton Hotel will be holding an Antique Machinery Show/Woodchopping Event in November. The actual date though has yet to be finalised according to organiser Jason Steele. By Vinnie Todd

Tee Off for Breast Cancer 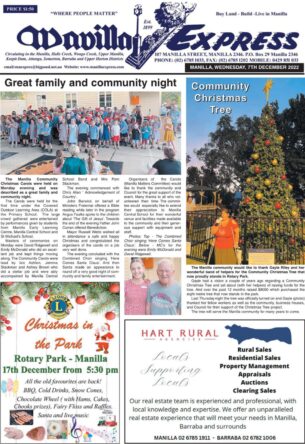